Are you...
か Interested in speaking or reading Japanese?
[center]
か Studying JP, but have questions?
か In need of someone to help you translate something?
か Planning a trip to Japan?
...If you can answer YES to any of these Q's, consider joining!!
会員 / Members

Online Dictionaries
Weblio ~Takes some getting used to with all the search options, but it is a more comprehensive/native style of a dictionary.
Renshuu  ~The guy who owns this site is really responsive, if you ever want to suggest additions/corrections. They even have their own forum and practice games and shizz.
Kanji Draw Search ~sometimes you don't know how to look up a kanji via radical...we aren't all that awesome. As long as you know basic stroke order rules, you should be able to search here! It also gives you suggestions as you are writing, which is helpful.

Study Resources
Quizlet - A great online flash card app. Has leader boards, and various ways you can study. Perfect for gamifying your study session!!!
I made quite a few JP related flash card sets, if anyone would like to try (if you make one, I'll add it to the list)

I recently traded 20 Magic the Gathering Boosterpacks for 20 Japanese ones. I'm planning on translating all the cards in a pack, and as a reward opening the next one. It's non-standard set, so they're not really valuable cards, but it can be a fun way to improve my reading skills.

@alucinor wrote:I just started learning last weekend, but I'm having a lot of fun with it. I'd like to join! I don't uh, know how to say that in Japanese though.

I recently traded 20 Magic the Gathering Boosterpacks for 20 Japanese ones. I'm planning on translating all the cards in a pack, and as a reward opening the next one. It's non-standard set, so they're not really valuable cards, but it can be a fun way to improve my reading skills.

Welcome! (youkoso)
I actually really enjoy fast-translating Japanese Pokemon cards before they are released, because you get many of the same words popping up over and over (deck, hand, shuffle, flip a coin, opponent, etc...) and I imagine it would be similar for MtG cards too! I'd love to help you get started with that

Feel free to link them here, and I can try and help out with phrasing. Might be a BIT harder for me though, since I don't know ALL the rules of magic XD just a base understanding lol!! 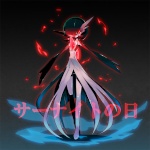 One of the cards I opened was "Scrapyard Mongrel". Its Japanese Translation is here, while its original English text is here. I didn't have the English open while working on it.

Names have Furigana on them, so I can at least try to pronounce them. It's really, really hard to see on the website, because the text is so small, but I can sort of make it out on paper. I think this one comes out to "kuzutetsu jou no jisshyuken"? Turns out "ken" is one way to say a kind of dog, dunno about the rest of the name. Its type line is "kuriichaa - (something) ken". In English it's "Hound", but I couldn't figure out what that Kanji is. Some type lines are "Kuriicha" (creature), "sooserii" (sorcery), "enchanto" (enchantment), and "oora" (aura).

Its text blob has a lot, but most of that is in parenthesis. If I ignore the parenthesis I can try to translate, and if I still don't know what mechanic that is I can try to figure it out from the reminder text. One thing that Magic does is reference its own name on the card a lot, so most of the Kanji there is already translated from earlier. Most designers can replace the card name with "~" or "CARDNAME" to make it easier on themselves.

I translated it all one crazy long word, because there are no spaces in Japanese, but once I recognized a few words the card made sense. Some of the word are "kontoro" (control), "aateefakuto" (artifact), and "tounpuri" (trample). I guess that "anataga" is some particle meaning "as long as", since that's standard magic phrasing, and there's a +2/+0 on the card (luckily written in actual numbers). So the card is something about controlling artifacts and having +2/+0 and trample, which turned out to be the entire card!

This is a common, so the text is pretty straightforward. I had some crazy "goburin" (goblin) card with lots of text and Kanji, so I'll hold off on that one. I did figure out this set of kanji means "draw a card", so I'll probably see that a lot! (枚引く)

It's a lot of fun, although I still don't have a perfect grasp of the alphabets, so it took a lot of chart-searching.

(I'll write this in English as well as I think this messages' grammar is probably wrong.)

Posts : 40
Join date : 2010-12-29
I want to learn how to play Japanese games the year before they get translated officially and released in to English. Etrian Odyssey V took a year and then some!

@boy from asension wrote: Everyone, why are you learning Japanese?
I want to work on Geology in Japan, but I think that my dream is probably unique.

That's a respectable dream you have there! My reasoning isn't that special haha

I started learning Japanese when I was 12, there was a language program at my highschool (or middle school? For you Americans) where it was compulsory for every student to study a language for at least 3 years.
I had French, Italian and Japanese to choose from and the other 2 didn't seem to interest me. Once my 3 years was up, I decided to continue it until the end of highschool and even when I graduated I thought it would be a waste to throw away 6 years of study so I thought I'd study it in college as well. It's been a good 7.5 years so far! But I have no idea what I'd do with this skill in the future hahaha
_________________

I added you ^_^
What is your current level of Japanese? (none, beginner, intermediate, advanced, native...etc?)


Try breaking down the sentence, see what you can make of it! Post your best translation. This is taken from a native speaker's tumblr that I randomly decided to follow one day because they seemed to post interesting/philosophical quotes

SPOILER - how I went about translating this sentence!

^~that was probably my 3rd redo/rephrase of the sentence! What do you guys think? It's a tough one!

I'll add in hiragana just so that people who can't read kanji yet can give it a try as well :3

My working:
To me this becomes;
"I think the times when I want to help the world are often my weakest times."


世の中の役に立ちたいとか思う時 - The time which I want to help the world.
思う時は大 - The time I think are usually ("usually" is technically a better translation but for some reason "often" feels better to me in this situation).
弱ってる時 - the time I am weak (again this bit I thought sounded better as "weakest times" though "I am weak/being weak" might be a slightly more direct translation).

I added you ^_^
What is your current level of Japanese? (none, beginner, intermediate, advanced, native...etc?)

Sorry for the late reply!

I would say intermediate? I studied Japanese in highschool for 6 years but since I graduated I haven't continued learning (though I hope I can find the time to soon). My Japanese has fallen off a bit since but with some practice I can get up to scratch again

Re: The Japanese Language Learners Club